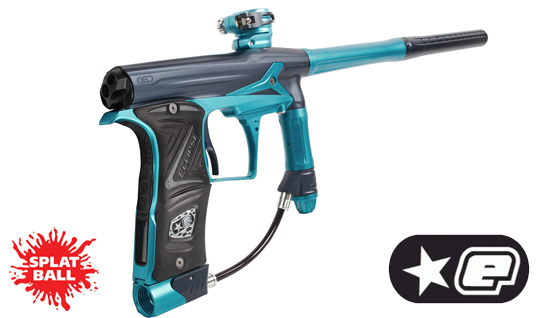 The Geo3 has taken the basic operating principle of the Geo2.1 and completely reworked it. In order to achieve optimum efficiency in a wide range of circumstances it is beneficial to isolate the firing chamber from the gas supply during firing cycle so that no excess gas is lost down the barrel after the ball has exited. The Geo has always incorporated this feature by selectively controlling supply to the firing chamber via the ISCIS (Innovative Solenoid Controlled Isolation System) Valve. The Geo3 incorporates the Second Generation ISCIS Valve, a complete rework of the original principle aiming to improve efficiency and reliability. The main body of the solenoid is now all aluminium. The secondary spool-driven poppet that controls shut-off of the gas supply to the firing chamber during the firing cycle now works independently of the bolt drive side of the solenoid. The new design also no longer utilises the back-check ball or the Purge Control Valve (PCV) of the old Geos which reduces parts count and further improves reliability. The whole mechanism is more reliable and far more robust than the old solenoid. More importantly to some, by reducing losses from the solenoid during the firing cycle there has been an increase in efficiency in the Geo3.

A great deal has been learnt through the development, testing and subsequent on-field use of the Ego11’s adjustable solenoid flow controls. By accurately controlling the flow of the bolt drive exhaust gasses through the solenoid the acceleration and speed of the bolt can be adjusted. Changes in the bolt speed results in changes to feel, sound signature, paint handling, rate of fire and even efficiency. By allowing the user access to this type of adjustment “on-the-fly” with an external adjuster located in the side of the frame means that a player can alter the feel and performance profile of their marker within seconds. In some cases at extreme levels of adjustment there may be need to fine tune the markers dwell to match the required bolt speed, but in general use the BSC adjustment is as simple as dialling in the velocity on the inline regulator.

With players continually wanting to shoot the most fragile paint possible we are constantly striving to improve the way that our markers receive paintballs into them, how the ball

is transferred from the breech to the barrel, and how the ball is accelerated down the barrel. We do everything we can to make sure that the paint is handled in the most efficient way possible while still fulfilling all the other criteria required for a modern paintball marker to be competitive. During the loading and firing cycle the bolt plays probably the most crucial role out of all the components in the marker. With the Geo3 we incorporate a uniquely long bolt stroke. Doing this allows us to manipulate the profile and form at the head of the bolt in a significant manner when compared to other bolts and still provide a good breech seal during firing. The Extra stroke length is utilised to provide a shape to the head of the bolt that acts as a gentle interface between both the ball that is being pushed into the breech and the ball that is second in the ball stack, awaiting loading. The Geo3 bolt takes this to the next level with the Cure ST2 Bolt by providing a fully cushioned, rubber bolt head that is used to reduce impact forces on both the ball in the breech and the ball in the stack. It allows paint that would have previously been thought un-shootable to be shot with complete effectiveness. As if that wasn’t enough, you will also find the original Cure ST bolt included as standard with the Geo3.